Four months into her tenure as interim leader of D.C.’s public schools, Amanda Alexander is preparing to hire two deputy chancellors — among the most powerful positions in the school system.

At the same time, Mayor Muriel E. Bowser (D) announced Thursday she would begin a national search for a permanent chancellor to lead a school system engulfed in controversy.

Among the contenders, according to the mayor: Alexander, a D.C. Public Schools veteran who sought the post the last time it became vacant in 2016.

The mayor’s pick for schools chancellor is one of her most politically consequential decisions and will signal the direction Bowser has chosen for a system that educates about 49,000 children.

The mayor announced Thursday that she has assembled a 14-member committee to help with the search, as required by law. The “Our Schools Leadership Committee” will be led by Charlene Drew Jarvis, former Ward 4 Council member and former president of Southeastern University, and Sylvia Mathews Burwell, president of American University.

A teacher, parent, charter school official, student and the president of the Washington Teachers’ Union are among those on the panel.

A search firm has not been retained to assist with the selection, unlike in 2016, when the mayor enlisted Boyden, an executive search firm, to identify the best candidates.

Bowser said she will seek input from the public and hopes to have a permanent leader in place by early 2019.

Until then, the mayor said it is Alexander’s job to ensure the school system is operating effectively, which includes building a staff.

“We still have a school system to run,” Bowser wrote in an email. “We’ve always said we would finish the school year strong, be ready for the next school year and ensure that progress continues.”

Antwan Wilson resigned as D.C. schools chancellor in February amid revelations that he skirted the city’s competitive lottery system to place his daughter into a coveted high school. The deputy mayor for education, Jennifer Niles, also resigned in the wake of the scandal.

The deputy mayor post has been filled by Ahnna Smith since February. Bowser said the effort to fill that job permanently began this week, but, unlike the chancellor post, will not involve a search committee.

The scandal that felled Wilson followed another major controversy: A city-commissioned report discovered that 1 in 3 graduates in 2017 received their diplomas despite missing too many classes or improperly enrolling in makeup classes.

Wilson had been chancellor for just over a year when he resigned. He had arrived from Oakland, Calif., where he led that city’s schools for three years. In the District, he succeeded Kaya Henderson.

When Wilson was hired he brought in two deputies, Michael Gaal and Wanda H. Legrand. A spokesman for the D.C. school system confirmed that neither Gaal nor Legrand will return to their posts for the new school year, and Alexander is charged with hiring their replacements.

Education advocates, holding their own news conference, made clear Thursday they intend to scrutinize the selection of a chancellor. They said they want a chancellor who will work to close the achievement gap between low-income students and their wealthier peers and change a high-pressure culture in the school system that fostered this year’s scandals.

The advocates — a coalition of parents, teachers and community members from across the city — wrote the mayor with their demands and urged her to include the community as the chancellor search begins.

“The leaders of our public schools will decide whether our families have confidence in our public schools,” Markus Batchelor, the Ward 8 representative on the D.C. State Board of Education, said at the news conference. “We got to get it right this time.”

At the news conference, Bowser said the city had a “a very robust process” in 2016 and the same would hold true this time.

The mayor said it is important that the next chancellor have an understanding of the middle and high school years to effectively address the challenges facing students in those grades. Bowser said Alexander, whose experience is with elementary grades, is “exceptional at all levels.”

The D.C. Public Schools chancellor is a high-profile and coveted position in the education field, but if the mayor decides to turn outside the District for a school leader, she could face challenges. Candidates for the job who are running a school system would have to abandon their posts in the middle of the school year to assume leadership in D.C.

Several large school districts, including New York, Newark and Los Angeles, selected leaders this year. Houston and Boston are in the middle of searches. 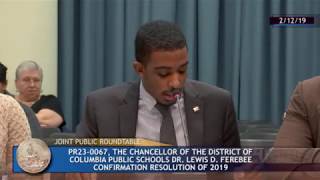 Markus on the Kojo Show: D.C. Charters Have Some Of The Highest Salaries For Administrators. So Why

Report: Ward 8’s Vision for the Next Chancellor of DC Public Schools

As Mayor Bowser Announces The Search For New DCPS Chancellor, Many Demand Transparency

The Next Leg: Your April 2018 Newsletter

Our 2017 Annual Report: A Year of Striving Together

Markus on the Kojo Show: D.C. Charters Have Some Of The Highest Salaries For Administrators. So Why

Statement on the Nomination of Dr. Lewis Ferebee to be the Next Chancellor of DC Public Schools

What’s going on with the D.C. mayor’s chancellor selection process?

Report: Ward 8’s Vision for the Next Chancellor of DC Public Schools

Creating a Collective Vision for the next DCPS Chancellor

Our Schools. Our Choice. Make your voice heard on the selection of the next DCPS Chancellor

Girls (Finally) Get Their Own School in Ward 8

As Mayor Bowser Announces The Search For New DCPS Chancellor, Many Demand Transparency